Martini srl presents MBM600 a “box motion” continuous vertical packaging machine, the result of the constant technological innovation that celebrates us. The particular independent movement of the sealing devices provides total control both of the vertical and horizontal axes, thus optimizing the working times.

Not only that. It is possible to program the closing time of the horizontal jaws in order to obtain optimal seals without changing the temperature and without losing speed.

To complete the already wide range of accessories, we have developed a special device for the production of four seals packages thanks to the forming device integration, decreasing changeover times and avoiding any new calibration. 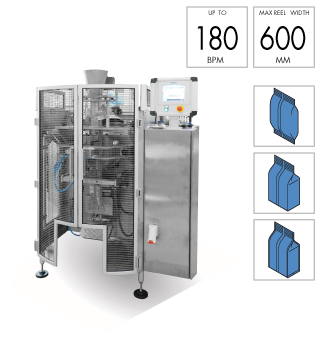 These are some of the main features:

Which Bags can be used for this intermittent vertical packaging machine: